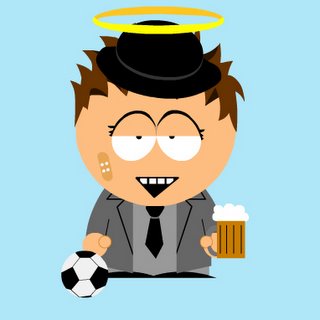 "The government's view of the economy could be summed up in a few short phrases: If it moves, tax it. If it keeps moving, regulate it. And if it stops moving, subsidize it."

Paralegals are fungible goods. One is just the same as another, and it doesn't matter if they stay for a week or a lifetime. They're all equally unable to do anything. When something is fungible, we shouldn't be providing incentives for them to stay. It's bad enough that no one's moved to fire her now that she's broken her ankle and is clearly unable to do the job. She can't run down the hall to make photocopies, she can't race to my office to deliver documents, and she can't carry as much as we usually require. So the fact she's keeping her job is bad enough. But even worse, we're paying for her injuries.

Anonymous Dog urinated on the carpet this morning. He's supposed to be trained not to do that. I rubbed his nose in it, just like I do with the associates. They're supposed to be trained to do good legal work, but it doesn't always happen. They're constantly having accidents. Not finding the right cases, not making the right arguments. At least the dog's accidents don't cost the firm money. I should hire my dog. Islam on the Outskirts of the Welfare State

In few places on earth is the air fresher than in a Swedish housing project. Take Bergsjon, which sits five miles from the center of Sweden's second-largest city, the stately Dutch-built port of Gothenburg. Home to a Volvo plant and some of the world's biggest shipyards, Gothenburg was long an industrial powerhouse. Bergsjon was built between 1967 and 1972 to reward the workers who made it that. Bergsjon resembles the places Swedes love to retreat to in midsummer — quiet, pristine, speckled with lakes and smelling of evergreen trees — but it is only a short tram ride away from the city's giant SKF ball-bearing plant. The center has no cars. Its 14,500 people live in apartments set within a lasso-shaped ring road, on grassy hills that climb toward the country's rustic uplands. As Asa Svensson, a municipal coordinator for the development, notes, "It was planned for people who like to be in the country."
Eingestellt von jessica um 15:42 Keine Kommentare:

Excellent reporting organization regarding on-going and potentional conflicts around the world, which affect the flow of international commerce and threaten global security.

Six conflict situations around the world deteriorated in January 2006, according to
the new issue of CrisisWatch,* released today.

Nepal’s political turmoil continued ahead of planned 8 February municipal elections
and amid a major escalation in violence between security forces and Maoists.
The situation in Sri Lanka is approaching outright civil war: January was the
deadliest month since the signing of the 2002 ceasefire. Côte d’Ivoire was shaken by
four days of violent rioting. Security deteriorated in Nigeria with a series of
apparently politically motivated attacks on oil production in the Delta region.
Kyrgyzstan’s breakdown gathered force as a string of political murders continued.
Tensions over Iran’s nuclear program increased with Tehran’s breaking of UN seals on
three nuclear research facilities and subsequent international efforts to refer Iran
to the UN Security Council.
Three conflict situations showed improvement in January 2006. Somalia’s peace
process saw a breakthrough with the signing of the Aden declaration in Yemen on 5
January uniting rival factions of the transitional government.
There was cautious optimism for Liberia after the inauguration of Ellen
Johnson-Sirleaf as president. And Kuwait became the first Gulf state to
democratically replace a leader using a constitutional process.
For February 2006, CrisisWatch identifies Nepal and Sri Lanka as Conflict Risk
Alerts, or situations at particular risk of new or significantly escalated conflict
in the coming month. Conflict Resolution Opportunities are identified in Northern
Ireland and Sri Lanka.

Conflict Resolution Opportunities
Northern Ireland (UK), Sri Lanka
* NOTE: CrisisWatch indicators - up and down arrows, conflict risk alerts, and
conflict resolution opportunities - are intended to reflect changes within countries
or situations from month to month, not comparisons between countries. For example,
no "conflict risk alert" is given for a country where violence has been occurring
and is expected to continue in the coming month: such an indicator is given only
where new or significantly escalated violence is feared.

Morgenavisen Jyllands-Posten is a strong proponent of democracy and freedom of religion. The newspaper respects the right of any human being to practise his or her religion. Serious misunderstandings in respect of some drawings of the Prophet Mohammed have led to much anger and, lately, also boycott of Danish goods in Muslim countries.